Our time in the Kruger Park was a blast. We saw a lot of animals and had some good experiences. Over the next few days I’ll post some incidents and stories.

Marloth Park is a settlement on the banks of the Crocodile River. Animals live freely with people. My mother’s brother and his wife live there. Our first evening was spent with them; they have a beautiful home with an unobstructed view of the river. Upon our arrival we saw Zebra grazing in their yard it was a beautiful sight.

Later in the evening a warthog snorted his way towards us, ripping their lawn to pieces. Rena seemed unfazed by his presence and went inside to find him some food. Corn. I took a picture from their balcony. The warthog is a massive beast and a definite force to be reckoned with. I went downstairs and sat two feet from him. While watching him I asked Rena if he won’t charge me. She told me that he’ll never do such a thing describing his good nature and behavior. 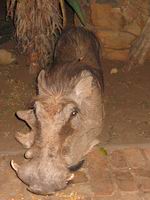 Well the next moment he charged! In full blown aggression he was ready to kill me. Demon invested. Not quite. Due to some extreme gymnastic abilities on my side I evaded the satanic invasion of my privacy.

With adrenaline rushing through my system I managed to laugh at the situation. Rena was totally embarrassed and chased the big old pig out of their yard. Her husband hosed him with some water and that was that.

Later that week I read my e-mails and found that one of our best friends prayed for us on Monday (she didn’t know why) I think I know why.

Practical tip: Don’t sit within two feet of a warthog.