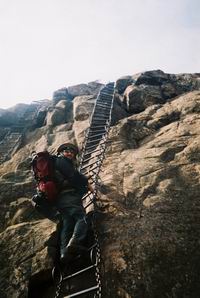 Adventures are impregnated with expectations and anticipations. These two elements provide the excitement in the air before the journey. Nights before the adventure are spent dreaming, imagining, visioning. When Lollie decided to go to Italy it already started. In my mind I conceived a plan for hiking the Grand Traverse – two hundred and eighty kilometers on the highest mountain range in South Africa.

I spent most of last weekend preparing for the trip. Buying food for a twelve day hike was a daunting task (planning to carry the weight even more challenging). On Monday we drove into the province of Kwazulu Natal – ready for the journey – an epic one.

Early Tuesday we started hiking laboring our way up the mountain. Schalk kept a detailed journal of every hour. Detailed. What we ate, saw, spoke. . We reached the chain ladder and after leaving the last rung we were on top! The scenery was beautiful, being on the roof of Africa is truly amazing.

We had a beautiful view of Devil’s tooth. Winter brought a huge drought to our country turning this alpine environment into an arid desert. Water was scarce, at the Tugela falls, South Africa’s highest waterfall, the river was reduced to a few still standing pools – dead water.

We stocked up on water and slogged our way South. Navigating with map and GPS we winded in and out of valleys reaching vistas from which we could see miles away. After seven hours of hiking with our 65 pound packs we reached our first evening’s destination. It would be our first evening of twelve evenings on the trail.

Icidi is a beautiful place, a frozen waterfall with an alpine pool provided cool refreshment. It also helped a lot in cleaning our dirty bodies. The winter served up a lot of fires on the mountain and we walked through miles of burnt mountain vegetation.

At eight in the evening we were in our bags sleeping. Schalk woke two hours later convinced that it was early morning! We had a good laugh and tried to sleep again. Early Wednesday morning I woke up to the sound of a pony or horse snorting. It was a cold evening and I was snuggled into my sleeping bag. I dozed of thoughts of horses galloping in my mind. A few minutes later my dream was distracted by someone running away. It startled me as I tried to place the sound into a known category of my mind – none. Just then I saw someone’s hand reaching into our tent. Needless to say – I screamed like a pig. The perpetrator ran away – but he stole two of our three backpacks.

My scream woke Schalk and Jacque and we could only hear them run away with our stuff. At first we thought that Schalk and Jacque’s backpacks were stolen. I really felt bad for them, it was their first trip in the Drakensberg. Poor Jacque worked through his losses – all the gear he accumulated for this! His first hike. He reported in detail what he lost. Morning broke and we got ready to leave, I reached for my bag only to find out that my bag was not there! Jacque’s bag was the one that was left. Suddenly my position shifted from sympathizer to victim. Jacque on the other hand had the wonderful privilege of learning a valuable lesson without paying the price.

Our dream shattered (ala Crabb). It really pissed me off. Yes, I lost about $1000 of equipment but worse than that, my dream of connecting with God and hanging with a friend in a beautiful surrounding was obliterated. They invaded the wilderness God has used so many times to speak into my life.

They stole my car keys too and my dear parents drove all the way to bring me the spare – three hundred and fifty miles.

They are the Basotho the people who live in the country of Lesotho. They are a nomadic people, living on the roof of Africa. A small group of them gather in bands and rob people on the Berg. The South African army camped on the escarpment for four weeks in an attempt to arrest these villains. They caught not one!

We hiked back with the equipment we had left. I went through Kibler-Ross. Denying – It did not happen! Anger – what would a Christian way be to kill these people? Bargain – God I will give everything just make the Basothos choke on something and let us find our bags. Depression and Acceptance.

Our boots were in the tent with us so at least we had good foot protection. The problem was that we had a lot of equipment to take back with only one backpack. We devised a plan and carried the gear in shifts back to the car park. It was major PT. Our adventure was adventurous but not according to my script – we were thrust into a totally different story.

You know the Master Card advertisements? Well here’s one: