Staying in the Kruger Park is a tradition in lots of families. It also involves a particular rhythm. In order to see wildlife it’s essential to wake up early; five thirty will work. Game drinks early in the morning and late in the evening; those two times are the best time for sightings.

A typical day in Kruger consists of an early morning wakeup a game drive till eleven eating a brunch taking a nap and then a drive at four followed by a barbeque in the evening. Next day the rhythm starts again.

A game drive is a slow tedious affair. The speed limit in the park is fifty kilometers an hour (thirty one miles per hour). Driving through the park at that speed will reduce the animals to an unrecognizable blur. The key is to go slow; no need to set a new speed record in the park. A good speed for viewing is twelve km/h.

Some people have a systematic scanning procedure to see game. They will look either move their eyes vertically or horizontally over the brush. In doing this they will look for the slightest movement or irregularities in color or texture. Game has the most amazing camouflage system. Lions can sometimes be spotted by only observing the swoosh of their tails. The above mentioned technique is the more thorough method.

Other people are too lazy to use a systematic mode of viewing. They can’t concentrate for too long. In order to make up for their deficiency they race through the park at neck breaking speeds searching for a concentration of cars (people who used the thorough method). They feed of the successes of others. 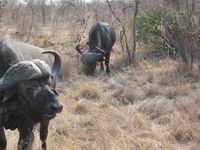 Game watchers have different goals too. Some people go to bag the big five. Seeing lion; rhinoceros; leopard; elephant and buffalo are all they’re interested in. Others love birds. Instead of scanning the ground they will scan the trees. On top of these differences you have those who love insects and reptiles – they love to scan the water. Different strokes for different folks.

Now imagine the class between people with different goals and techniques in the same car! One person feverishly looking for the big five the other inspecting the flying five hundred. That’s what happened in our car. Lollie the bird watcher, Tom the big five hunter.

Here’s an illustration of how it plays itself out in the drive. Lollie yells ‘stop!’; ‘stop!’ I’m seeing something. Tom immediately assumes it’s a lion or one of the five. She looks in the treetop I’m looking at the ground. She takes her binoculars and look at an eagle roughly twelve kilometers from where we are (read three hundred meters). 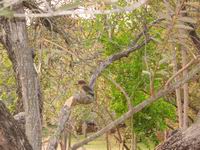 We study the bird and look at our bird book after which we identify the eagle. Another family approaches us – spotting that we spotted something. They drive towards us and ask ‘what are you guys seeing?’ My response: ‘nothing, just an eagle’.

Nothing just an eagle. How arrogant I realized afterwards. Reducing something to nothing because it’s not part of my goals! I do it in other parts of my life too. How sad. I joined Lollie’s bird watching venture and I discovered a whole new world in the Kruger Park. I’ve visited it at least once a year for the last twenty and I’ve never noticed the birds. I repented and scales fell of my eyes. I’m a bird watcher (and a big five watcher).